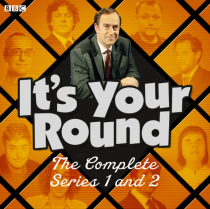 The format is simple: there isn't one.Instead, each of the panellists brings their own round for the others to play, meaning that each show is unique, untried, and unpredictable. In each episode, four top comedians will battle it out to see who gets to be champion. Angus Deayton is the host, valiantly trying to make sure everyone comes out of it with their reputations intact.The panellists trying … to beat each other at their own games include Miles Jupp, Sara Pascoe, Andy Parsons, Rebecca Front, Russell Kane, Josie Long, Tim Key, Micky Flanagan, Bridget Christie, Alan Davies, Roisin Conaty, Sandi Toksvig, Clive Anderson, Will Self, Gyles Brandreth and Alex Horne.Hear them battle it out in made up rounds such as 'What Does My Dad Know?', 'It's Not Your Round', 'Twitter-witter-witter-who', 'Nine Previous Convictions', 'Cockney Rhyming Slang Charades' and 'Fantasy Funeral'.'Deayton...is a born host, an arch, deadpan foil to contestants' excesses.' - The IndependentDevised by Benjamin PartridgeWritten by Angus Deayton and Paul PowellProduced by Sam Michell