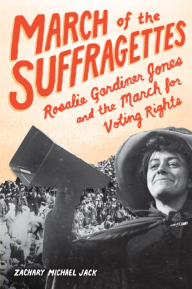 March of the Suffragettes tells the forgotten, real-life story of &quoteGeneral&quote Rosalie Gardiner Jones, who in the waning days of 1912 mustered and marched an all-women army nearly 200 miles to help win support for votes for women. General Jones, along with her good friends and accomplices &quoteColonel&quote Ida Craft, &quoteSurgeon General&quote Lavinia Dock, and &quoteWar Correspo… ndent&quote Jessie Hardy Stubbs, led marchers across New York state for their pilgrims' cause, encountering not just wind, fog, sleet, snow, mud, and ice along their unpaved way, but also hecklers, escaped convicts, scandal-plagued industrialists on the lam, and jealous boyfriends and overprotective mothers hoping to convince the suffragettes to abandon their dangerous project. By night Rosalie's army met and mingled with the rich and famous, attending glamorous balls in beautiful dresses to deliver fiery speeches; by day they fought blisters and bone-chilling cold, debated bitter anti-suffragists, and dodged wayward bullets and pyrotechnics meant to intimidate them. They composed and sang their own marching songs for sisterhood and solidarity on their route, even as differences among them threatened to tear them apart. March of the Suffragettes chronicles the journey of four friends across dangerous terrain in support of a timeless cause, and it offers a hopeful reminder that social change is achieved one difficult, dauntless, daring step at a time.