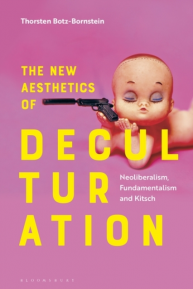 What are the predominant aesthetics of the twenty-first century? Thorsten Botz-Bornstein argues that deculturation, embodied by the conspicuous vulgarity of kitsch, is the overriding visual language of our times.Drawing on the work of Islam scholar Olivier Roy, who argued that religious fundamentalism arises when religion is separated from the indigenous cultural values, Botz-Bornstein shows that … the production of 'absolute' truths through deculturation also exists in contemporary education. The neoliberal environment has separated learning from culture by emphasizing standardization and quantified learning outcomes. In a globalized environment, the idea of culture is no longer available as a referent; instead we are taught to rely on the culturally neutral term 'excellence'. For Botz-Bornstein, this is an absolute value similar to the 'truth' of religious fundamentalists. Similarly, kitsch is what happens when aesthetic values are separated from cultural contexts. Kitsch is aesthetic fundamentalism. Kitsch aesthetics are an aesthetics of excellence. The consumption of kitsch can be understood as an intrinsically narcissistic impulse, reinforced by social media, individuals recycling their own selves without being confronted with the culture of the other. The existence of self-centred alternative truths , fake news and conspiracy theories and selfies are linked together in the fundamentalism neoliberalism kitsch pattern. Including analysis of the intersections of 'cute', 'excellent', 'sublime', and 'interesting' in contemporary aesthetic culture, this is a journey through philosophy, psychology and cultural theory, redefining a new aesthetics of deculturation.