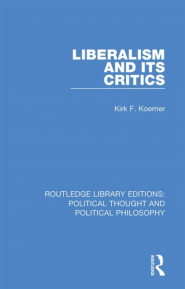 First published in 1985. Liberalism was under increasing attack from both socialists and conservatives towards the end of the twentieth century. This book argues that, far from having little to contribute towards solving the problems of the modern world, liberalism is, in fact, of central importance. It discusses the arguments against liberalism put forward by four major political theorists, refut… ing the general thrust of their criticisms and taking issue with many points of detail used by them to support their arguments. It analyses the origins of liberalism, discusses its major achievements and explains why it continues to be a crucially important movement.