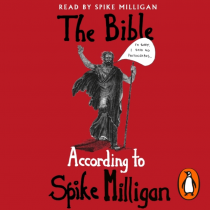 Penguin presents the unabridged, downloadable, audiobook edition of The Bible According to Spike Milligan, written and read by Spike Milligan. The Old Testament: but more mad, more merry, more... Milligan! And God said, Let there be light; and there was light, but Eastern Electricity Board said He would have to wait until Thursday to be connected. There have been many interpretations of the Ol… d Testament over the centuries but never one quite like this. Spike Milligan has rewritten, in his own inimitable style, many of the best-known stories of the Old Testament, featuring characters like King my brain hurts Solomon, the great oaf of a giant Goliath and the lesser-known crossword clue, Hushai the Archite. Believers and non-believers alike will enjoy this hilarious re-working, where the jokes, jests and jibes tumble over each other from Chapter One, Verse One until kingdom come.