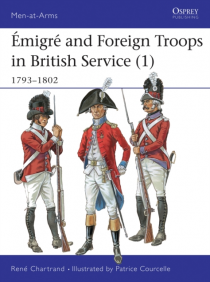 Following the Revolution in 1789, members of the aristocracy were increasingly persecuted, and many of them fled abroad. These exiles became known collectively as ' migr s', and despite initial confusions and indecision, many of them were taken into British service. This fine text by Ren Chartrand examines the organisation, uniforms and insignia of the migr troops in British service from 1793 t… o 1802, accompanied by plenty of illustrations including eight full page colour plates by Patrice Courcelle.