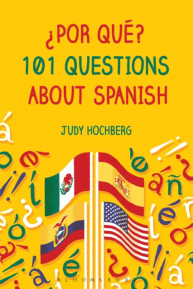 Por qu ? 101 Questions about Spanish is for anyone who wants to understand how Spanish really works. Standard textbooks and grammars describe the &quotewhat&quote of Spanish - its vocabulary, grammar, spelling, and pronunciation - but Por qu ? explains the &quotewhy&quote.Judy Hochberg draws on linguistic principles, Hispanic culture, and language history to answer questions such as:Why are … so many Spanish verbs irregular? - Why does Spanish have different ways to say &quoteyou&quote? - Why is h silent? - Why doesn't Spanish use apostrophes? - Why does Castilian Spanish have the th sound?Packed with information, guidance, and links to further research, Por qu ? is an accessible study guide that is suitable for Spanish students, instructors, native speakers, and the general reader. It is a valuable supplementary text for serious students of Spanish at all levels, from beginning to advanced. Por qu ? also covers topics usually left to specialized books, including the evolution of Spanish, how children and adults learn Spanish, and the status of languages that co-exist with Spanish, from Catalan to Spanish sign language to the indigenous languages of Latin America.