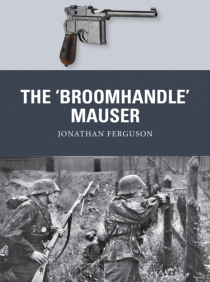 At a time when most handguns were limited to six rounds, the ten-shot Mauser caught the attention of the world for its unprecedented firepower and formidable high-velocity 7.63 25mm cartridge. This saw its ultimate expression in the first-ever select-fire handgun the 'Schnellfeuer' machine pistol, fed by a detachable magazine and offering both full-automatic and single-shot modes. The C 96 was t… he first semi-automatic pistol to see combat, arming both sides in the Second Anglo-Boer War, and seeing service with the German, Russian, Chinese and other militaries. Widely purchased commercially, it was carried by none other than Winston Churchill in the Sudan and South Africa, became prized by the Irish Republican Army and Soviet revolutionaries, and even armed Han Solo in the 'Star Wars' movies.Featuring full-colour artwork and an array of revealing photographs, this is the engrossing story of the C 96 Broomhandle Mauser, the ground-breaking semi-automatic pistol that armed a generation of military personnel, adventurers and revolutionaries at the turn of the 20th century.