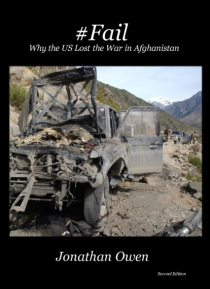 Jonathan Owen, in his book #Fail: Why the US Lost the War in Afghanistan, provides a military insiders look at why the US counterinsurgency strategy was doomed to failure. When Owen's research was first released in 2010, it challenged the flawed strategy of senior leadership and was suppressed. However, since then, the accuracy and predictive power of Owen's research withstood the test of time and… is now being heralded as the first major pioneering work overhauling the US military's counterinsurgency strategy in the 21st Century. Owens research and analysis is a detailed indictment of the entire US militarys counterinsurgency strategy, or lack thereof. Owens research pulls no punches and systematically takes down one sacred cow after another respective of the militarys strategy in Afghanistan. Owen doesnt stop there and places blame by name on the likes of General Petraeus, David Kilcullen, and many other snake oil salesmen of military strategy. In short order, Owen debunks the key tactics of the US military strategy in Afghanistan as a waste of resources and proves our most senior generals were either willfully ignorant or incompetent when it came to being true military strategists. Not satisfied with simply pointing fingers, Owen details a truly viable strategy for Afghanistan, which promises actual decisive effects in short order. The beauty of Owen's strategy is in its simplicity and the fact it can be replicated elsewhere. In it, Owen explains how when fighting insurgents, the US military can turn the tables and force the insurgents to fight against the conventional strengths of the US military. This flies in the face of the current failed strategy of playing by the insurgents' rules in the vain hope of achieving victory. To his credit, Owens prescient analysis accurately predicted the US failures in Afghanistan and Iraq almost a decade before they have now come to pass. Owens research presented in book form has been briefed to members of Congress, the senior military officers, academia, and the intelligence community and is now available for public release. Owen's analysis literally rewrites the book on how the US military should conduct counterinsurgency operations. Owens book is a must read for any serious policy maker, military member, or anyone wanting to know the true reasons for what went wrong with the USs war in Afghanistan. If the US is to avoid repeating the intellectual dereliction that led to the strategic disasters in Afghanistan and Iraq, Owens research should be mandatory reading.