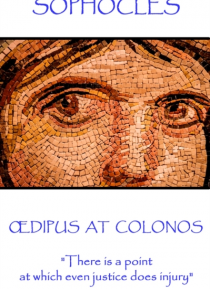 The village of Colonus, near Athens, was, in the year 495 BC, the birthplace of Sophocles. Sophocles place in Greek Tragedy is assured. His birth places him between the two other giants of Greek tragedy; schylus and Euripides. He was 30 years younger than schylus, the reigning master of drama and was fifteen years older than Euripides, who would, in turn, usurp Sophocles. Sophocles was a handsom… e and agile youth and selected, at the age of sixteen, to lead with dance and lyre the chorus which celebrated the triumph of Athens and its Allies over Persia at the battle at Salamis. Sophocles career as a dramatist was marked by a victory in competition with schylus, under exceptional circumstances. At the time the remains of the hero Theseus were being removed by Cimon from the isle of Scyros to Athens and, at the same time, a contest involving the two dramatists was being held. schylus was lauded at the time as the supreme dramatist but Sophocles was popular if inexperienced. The first prize was awarded to Sophocles, greatly to the disgust of the veteran schylus, who taking umbrage, soon afterward departed for Sicily. By all accounts Sophocles would now write and exhibit tragedies and satyric dramas for the next sixty years. The canon of his work varies to between 120 and 180 plays, naturally a number were fillers and not of his highest standard but the prodigious output is extraordinary. In the annual Dionysia, the number of first prizes he won is put at between eighteen and twenty-four, with many more second prizes. On this basis alone schylus and Euripides were left a long way behind. So far from being dulled with age and toil, his powers seem only to have assumed a mellower tone, a more touching pathos, a sweeter and gentler mode of thought and expression. Sophocles was spared the misery of witnessing the final overthrow of his country, dying, at the age or around 90 after a long life full of triumphs and honours, a few months before the defeat of Aegospotami brought the downfall of his beloved Athens. This naval Battle of Aegospotami took place in 405 BC and decisively determined the outcome of the Peloponnesian War. In the battle, a Spartan fleet under Lysander destroyed the Athenian navy. This effectively ended the war, since Athens could not import grain or communicate with its empire without control of the sea. There are only seven dramas of Sophocles that have survived. It can be argued that Sophocles and his works were the high-water mark of Athenian excellence. He is rightly lauded and we can only wonder at the splendours he wrote that are now lost to us.

Other eBooks releases by Sophocles .