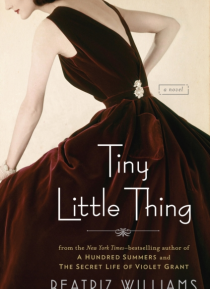 The New York Times bestselling author of Her Last Flight returns with the story of another Schuyler sister, a young woman embroiled in politics, passion, and dangerous secrets.... In the summer of 1966, Christina ';Tiny' Hardcastle stands on the brink of a breathtaking future. Unlike her spirited sisters, Tiny was the consummate well-behaved debutant, poised and picture-perfect, raised to serve a… s a consort to a great man. Now, as her handsome husband, Frank, runs for a Massachusetts seat in the U.S. House of Representatives, that long-sought destiny lies nearly within reach. But behind her glamorous facade, Tiny's flawless life is cracking. She and Frank both have secrets in their pasts that could shatter their political ambitions and the intricate truce of their marriage. So when two unwelcome visitors arrive at the Hardcastle family's Cape Cod estateFrank's cousin Caspian, a Vietnam war hero who knows a thing or two about Tiny's hidden past, and an envelope containing incriminating photographsTiny is forced into a reckless gamble against a house that always, always wins

Other eBooks releases by Beatriz Williams