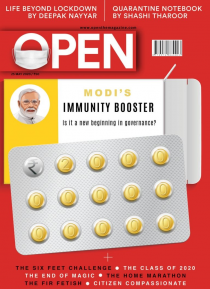 OPEN, a well-lit window on India addresses the progressive, globally minded reader and has stayed faithful to its promise of not dishing up regurgitated news or majoritarian opinion. The magazine is clutter-free, vibrant design and superior visual content, positions Open among the best looking magazines in the world. The magazine set out to be original and stimulating, and stays true to that secre… t covenant with its readers. In its brief existence of over four years, Open has already established itself as the sophisticated Indian's magazine of choice and has become a media product opinion builders, decision makers and policy makers look to stories in OPEN have been constantly featured and referred to in most reputed international media like The Guardian, The New York Times, The Huffington Post, The Wall Street Journal etc. “India’s very hip new OPEN magazine” is what Huffington Post has described the magazine as. Call Open the return of magazine journalism.