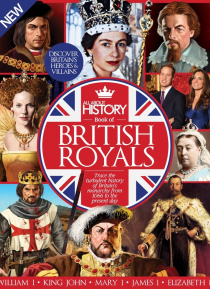 Discover incredible facts about every king and queen of Britain from 1066 to the present day, and uncover the truth behind royal scandals, conflicts and triumphs. From the bloody battles of Hastings, Bosworth and Agincourt, to the treacherous political courts of the Tudors and Stuarts, trace the turbulent history of Britain’s royal bloodline from its beginnings right up to the present day, with … the current queen, Queen Elizabeth II, the longest-reigning monarch in British history. Featuring: The birth of the British monarchy - Discover how the union of England and Scotland shaped the modern monarchy. Key historic events - From the Battle of Hastings to the Gunpowder Plot, find out about landmark events. Every king and queen since 1066 - In-depth guides, from William the Conqueror, through to Elizabeth II. Inspiring leaders - Learn about history's best leaders, including Henry VII and Elizabeth I.