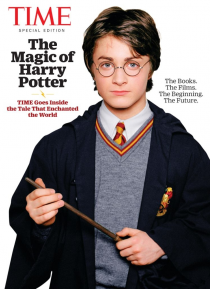 Today, the magical world of Harry Potter is all around us, in books and movies of course and also and plays, theme parks and everyday references and memes, which makes it hard to believe that the book that began it all, Harry Potter and the Sorcerer’s Stone is now 20 years old. TIME looks back at two decades of the world that J.K. Rowling created in this new special edition that traces how a boo… k initially written for children, captivated the hearts and minds of millions of people of all ages and became a worldwide phenomenon. From the friendship of Harry, Hermione, and Ron to the sorting hat and the houses of Gryffindor and Slytherin, a spirited game of quidditch, and the magical creatures that inhabited their world, it’s all here. Also included are profiles of the author J.K. Rowling and the meaning of Harry Potter, an overview of each book and movie in the series. Plus: interviews with Daniel Radcliffe and Emma Watson as well as other cast members. To round things out, there are “20 Life Lessons from Rowling and Co.” and a peek into the future – Potter may be over, but fans have years of stories and magic ahead.